The reverse features a very heavily abbreviated version of Gallienus's titles: Pontifex Maximus (chief priest of the state religion), TRibunitia Potesta (with the power of a tribune) for the 7th time, Consul for the 6th time, and Pater Patria (father of his country.)

The lion and bucranium theme may refer to the emperor's horoscope, and, speculating wildly, this coin may celebrate not only the emperor's titles, but also his birthday. 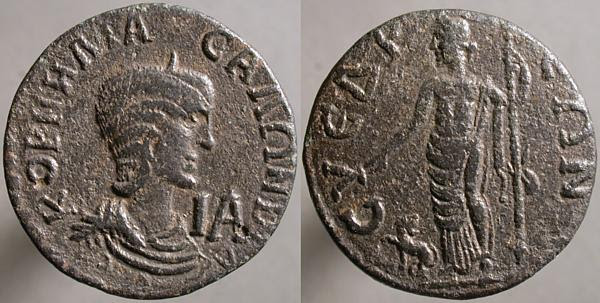 My life'd be easier if they all were listed in catalogs I already own, but that's not how it is, and not how it will be, so I keep buying books as well as coins.

Earlier this month I commented on the portrait on this coin from Side, but this one, with a touch of Elephant Man about it, really is rather distressing.

The Julian calendar was sufficiently inaccurate that frequent adjustments were needed to maintain a degree of synchronization with the seasons. One adjustment was the ludi saecvlari, Saecular Games, meant to be held every 110 years. In imperial times, they tended to occur when an emperor found them convenient. It's been proposed that the "Zoo Series" may commemorate such games held at Rome by Gallienus.

This coin certainly seems to make reference to them. While saecvlar can be translated as "era", the beginning of which the games celebrated, I know of no reason for the stag except as animals "hunted" in the arena.

As I mentioned Diogenes of Sinope in passing yesterday, it seemed like a good excuse to show a coin of that city, though it was minted centuries after his time. The city's held its name well, today it's Sinop.

As Sunday's post was, this is my first coin from its city, in this case Laerte, which I'm not finding much about, save that sometimes it's said to have been the birthplace of Diogenes Laertius, who wrote biographies of philosophers.

Different guy than Diogenes of Sinope, said to have looked for an honest man. 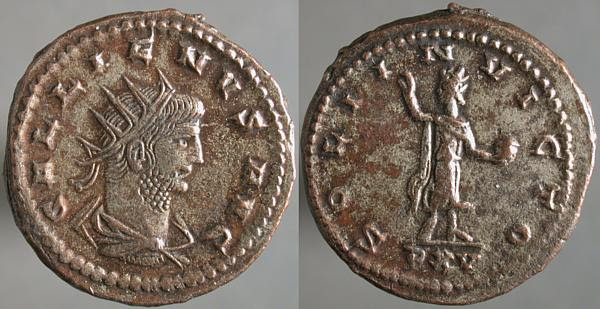 Sol Invictus, the unconquered sun, was brought to Rome early in the 3rd century by Marcus Aurelius Antoninus, the emperor Elagabulus, but didn't become a major cult in the city itself until it was promoted by Aurelian. (Not that Gallienus didn't issue Sol coins from Rome, though.)

In the east, though, as here at the imperial mint city of Antioch ad Orontes, the cult was well established already during the reign of Gallienus.

The globe Sol holds is not the earth, but the celestial globe, the sky as viewed from outside the universe.

Update: Geeze, is that supposed to be a crossbow, or just poorly drawn?

Apollo Propylaeus is Apollo "of (or at) the gateway" (thanks to Pat Lawrence for the translation on the FORVM message board).

I don't know the relationship between Cremna and this particular aspect of Apollo, but I do know this city minted coins with similar reverses for a long time. In time, I'll have a better idea why.

Meanwhile, it's my first coin from Cremna, which apparently still has good ruins, and a museum displaying things smaller than ruins.