Valerian II was the older son of Gallienus and Salonina, raised to the office of Caesar in 256, but died within two years. It's widely believed that his death came while on a military campaign in the Balkans in 258, at the hands of his protector, Ingenuus, but evidence for an earlier death seems to be gaining acceptance.

The object on the reverse, common on coins consecrating the memory of imperial family members, is usually called an altar, but Marvin Tameanko, in his Monumental Coins: Buildings & Structures on Ancient Coinage, advances the theory that they show shrine enclosures, small buildings that housed altars.

Heh, indeed. I think I've been way ahead of this trend. (Seen at A Small Victory.)

Some info on Side.

While imperial coins usually broadcast the virtues of the imperial family, or of those who are faithful to them, provincial coins commonly tout their city of issue. A week ago I showed a coin from Syedra advertising athletic competition. This coin, showing a pair of prizes (that on the right is mashed flat from being opposite the countermark, and the hammer that struck the countermark,) seems to be announcing a competition as well, says that Side has a neocorate temple for worshipping the imperial family, and goes on to declare that Side is the first city of its province, Pamphylia.

The reverse honors the faithfullness of the army, which held up until 268, when a conspiracy of officers assassinated Gallienus and raised Claudius Gothicus to emperor. No emperor would better Gallienus's reign of 15 years until Diocletian, who retired in 305, all the others falling to disease or murder far short of that length of term. 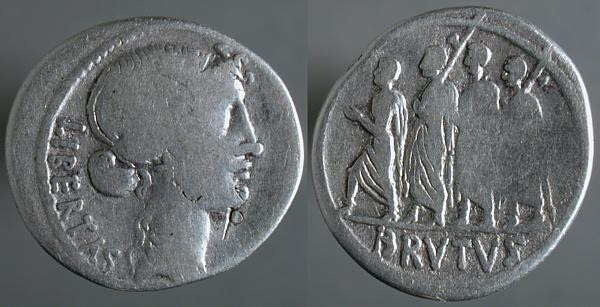 The issuing moneyer is Brutus, the future assassin of Julius Caesar. The date of issue and significance of the design are controversial.

One widely-held opinion, typified by Michael Crawford's Roman Republican Coinage, is that the coin was issued in 54 BCE and that the depiction of Brutus's tyrannicide ancestor a statement of opposition to the ambitions of Gnaeus Pompey Magnus.

An article by Steven Cerutti in the American Journal of Numismatics 5-6 argues for a date of 55 BCE, and Brutus's own ambitions, reminding Rome of his relative who expelled the last Roman king and founded the Republic.

David Sear, in his Roman Coins and their Values, Millenium Edition, walks a middle line, accepting the 54 date and offering a less specific "illustrious ancestry" and "patriotic devotion to the freedom of the Republic" explanation for the reverse.

Others hold out for 59 BCE, and Brutus's alledged involvement in the "Vettius affair", an assassination attempt on Pompey.

While the "EID MAR" denarius that Brutus issued in 42 BCE (there is controversy about in which months it was issued) to celebrate Caesar's assassination on the Ides of March can fetch a price equal to that of a modest home, this issue, and its companion featuring C. Servilius Ahala, also claimed as an ancestor by Brutus, are quite affordable.

You too can have the entertainment of geeking out about exact dates 2 millenia ago! 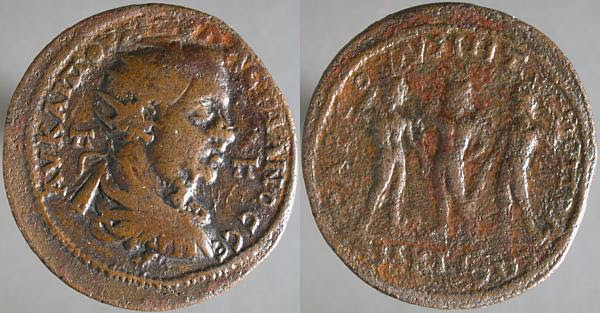 Some info on Tarsus.

Whatever incident or myth is depicted on this reverse seems to be lost to history. 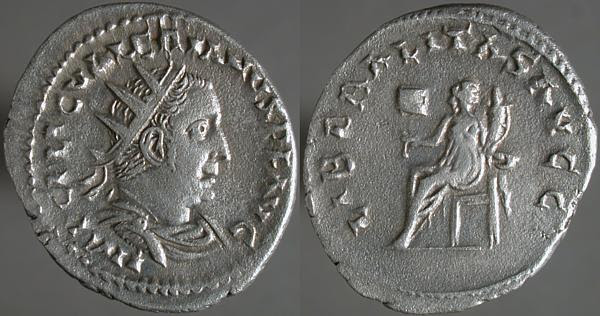 There's little point in paying for bread & circuses, or browbeating others into paying for them, unless you make sure to take credit for it.

The counting-board that Liberalitas is holding in front of her face was a flat paddle with coin-sized openings, which could be dipped into a sack of coins, any excess brushed free, and the contents dumped into the outstretched toga of each supplicant, over and over in rapid succession. 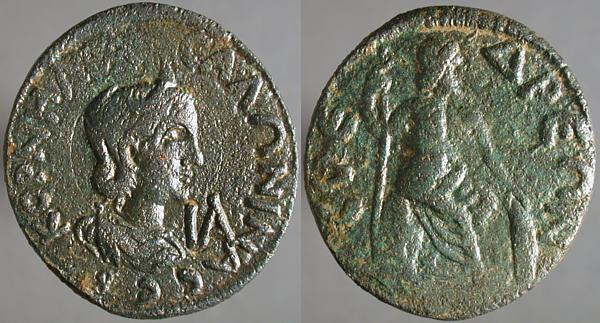 Some info on Syedra (scroll down.)

In November I posted a Syedra coin with a "Judgement of Ares" reverse. Here, also from that city, a less dramatic Ares, who was a common subject of coins from Syedra.